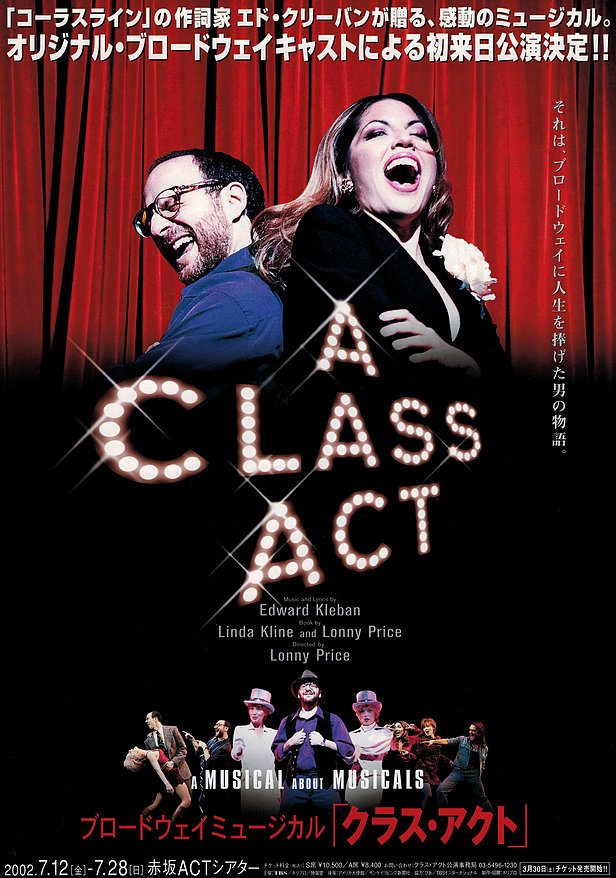 With a book by Linda Kline and Lonny Price (who also directed and starred), “A Class Act” used Kleban’s music and lyrics to illustrate how Kleban yearned to expand his work into not only lyrics, but music as well.

2001 (Ambassador Theater Broadway)
THEATER REVIEW; What a Songwriter Couldn’t Do in Life, Friends Have Done By BRUCE WEBER Published: March 12, 2001

Here’s a seeming paradox.
”A Class Act,” a musical based on the life and the songs of an unsung songwriter (something of a paradox in itself) made its first appearance last fall on the tiny second stage of the Manhattan Theater Club. Befitting its location, it was an almost bare-bones show, and it had its charms. Its major flaw was in its miscalibrated lionization of its subject, Edward Kleban, who was best known as the lyricist of ”A Chorus Line” but who never realized his ambition to write both the words and music for a Broadway show.

When the producers announced they would fulfill his dream posthumously — Kleban was 48 when he died of cancer 13 years ago — it seemed a mistake on two counts. For one thing, how would such a modestly conceived tribute, with only eight actors and without a hint of spectacle — or even much scenery — fill a Broadway stage, much less meet the expectations of extravaganza-trained audiences?

Except for the songs, all Kleban's own, "A Class Act" was written, produced and directed by his friends and enthusiasts.

And for another, it added a note of hubris to a show that had already oversupposed the appeal of its navel gazing. A neurotic, witty, irritating, grudge-holding perfectionist whose gifts were nearly but not quite first rate, Kleban was, evidently, a theater ”character,” beloved by theater insiders who, among other things, admired how he poured his own life experiences into his storytelling songs. And except for the songs, all Kleban’s own, ”A Class Act” was written, produced and directed by his friends and enthusiasts; it felt highly personal to the creators and, as a result, of insufficient interest to anyone not instinctively sympathetic to the travails of show business.

Curiously, the Broadway production of ”A Class Act” seems smaller in almost every respect, and perhaps more curiously it is a better and more satisfying show, one that has found its rightful dimensions. With the exception of one number excised and another, ”Don’t Do It Again,” added to showcase the marvelous voice of a new cast member, Sara Ramirez, the songs are the same. The three other cast changes are also largely for the good. But the producers have made only a few scenic concessions to the Ambassador Theater, where it opened yesterday. The impressive side wall of theater lights, the dark rear-stage panels that open to reveal a gold-lighted backdrop, a few projections, some minimal decorations that descend from the fly space and of course a full orchestra, still leave the show to be performed on a bare stage with only a handful of props.

In the confinement of the Manhattan Theater Club the show gave off a restiveness, an impatience to burst into greater view. That was certainly appropriate to Kleban’s personality, but it contributed to the show’s breast beating. At the Ambassador it feels more like the little show that could, and the sense of aspiration against the odds, which Kleban also held fiercely, is far more welcoming. In this day and age you can’t help but be sympathetic to a musical that relies entirely on such old-fashioned pillars as song and dance and story to support the contention that yes, this is entertainment.

Equally important, with adjustments in the book that make Kleban less of an icon and more of an Everyman, the show has become less of a glorifying monument to the man and more of a tribute to the human qualities he embodied: passion, yearning, the desperate craving to create meaning in a life. It was written by Linda Kline, Kleban’s companion in his last years, and Lonny Price, who also directed and stars, and they’ve maintained the narrative frame, which presents Kleban’s life in the context of a 1988 memorial service for him on the stage of the Shubert Theater (where ”A Chorus Line” was still running), his story rendered in the memories of friends he met mostly in the 1960′s in a songwriting workshop taught by Lehman Engel. But this is no longer a show that obstinately insists that Kleban’s relative obscurity was undeserved. Rather, it makes us feel that our own is equally so, and as a result its hanky-wringing emotions are well earned. You leave feeling genuinely touched, rather than debated with.

One might wish a few things were different, for instance that Mr. Price’s singing voice were surer and more commandeering. Or that the role of Lehman Engel (Patrick Quinn) had been written to allow a little more actorly eccentricity; he’s merely a voice of fatherly authority here, and Mr. Quinn (as did the actor he replaced, Jonathan Freeman) comes across as restrained by a part that seems to have been created with greater regard for reverence to Engel than for the animation of a character. The choreography could be more lively and original; one number rather painfully recalls the sendup of grooviness from the old television show ”Laugh-In.” And the gentler tone of the show robs its caricatures of Michael Bennett (by David Hibbard) and Marvin Hamlisch (by Jeff Blumenkrantz) of some of their delicious, unflattering wickedness.

But overall the show’s alteration in spirit carries the day. In an indicative moment in the second act, Kleban’s oldest friend and first love, Sophie, suggests to him that his words have always been better than his music. In the Off Broadway version, when she said, ”What if your words are better than your music?,” it was an admonition to face reality and it confounded the premise of the show: so why should we care enough to listen to two hours of his music? On Broadway, Sophie (played by the same actress, Randy Graff, with the same endearing warmth) says instead: ”Maybe your words are better than your music,” and it means something different. It means, ”So who cares?”

The change underscores the show’s new emphasis on Kleban’s humanity rather than his talent, and it allows us to hear his songs with greater generosity. He was gifted as a composer, and it’s perhaps impossible to define the line between a good song and a memorable one, but for all their variety and melodic poignancy, Kleban’s songs are strongest in their lyrics. What the revised version of ”A Class Act” allows for is the context to accept that, and not only does that jibe with Kleban’s own obsession with context, the songs themselves are often quite moving. And a few really stick with you.

”Light on My Feet,” the show’s reiterated anthem, matches its goofily mordant lyrics about being present at one’s own memorial service (”I thought I’d drop by/To hear the people gushing/’Cause after you die/They always get you blushing”) with a toe-tapping tune that serves not just the wit-inflected ache of the song but of the whole show. ”Better,” a Sondheimesque life assessment (”I’ve been healthy and in pain/Pain is reason to complain/Ask someone who’s been insane/Sane is better”), is ruefully joyous, or maybe that’s joyfully rueful.

Ms. Graff’s tender and wise rendition of ”Next Best Thing to Love,” a paean to a lost connection, remains a showstopper, but it now provides the show with a powerful emphasis of its newly found theme, that living life fervently yields rewards, even in disappointment. ”And come to think of it,” she sings, ”I guess the next best thing to love/Is also love.”

Real life? Well, we can all hope, in the end, for such neat and consoling wisdom. And hope, after all, is something that real musical theater, like ”A Class Act,” does best.