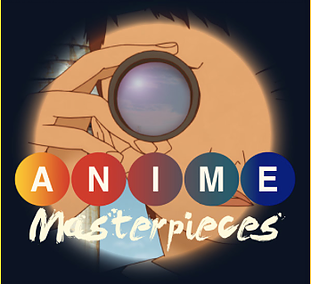 Anime Masterpieces was a past educational series aimed at promoting the art of Japanese animation via screenings of classic anime features and panel discussions.

Anime Masterpieces was a past educational series aimed at promoting the art of Japanese animation via screenings of classic anime features and panel discussions. Our events were completely scalable. Whether your organization was a large museum or a small classroom, we could help you customize our program offerings to suit your needs and budget. Highlights of our programming included:

Study Guides featuring original essays by our notable contributors and colorful imagery from the film. Our Study Guides put a wealth of knowledge about the history, context, and meanings of the films in the hands of each viewer who attended a screening event.

Our new Tekkonkinkreet Classroom Packs, including Study Guides for each student and two screening copies of the film on DVD. Each Study Guide contained Questions for Further Study, thoughtfully compiled by leading pop culture scholar Roland Kelts (lecturer at University of Tokyo and author of JapanAmerica: How Japanese Pop Culture Invaded the U.S.), allowing you to lead your own post-screening discussion.

Screening events accompanied by panels and talkbacks featuring leading scholars of cinema, history, and popular culture, as well as anime creators and industry insiders. Our pool of panelists and contributors include Pulitzer Prize-winning historian John W. Dower and Susan J. Napier (author of Anime: From Akira to Howl’s Moving Castle). We could also handle all details of travel, lodging, and event structure if desired.

Tekkonkinkreet is an award-winning anime feature film directed by Michael Arias. Adapted from Black and White, a three-volume seinen manga series by Taiyo Matsumoto, Tekkonkinkreet centers on a pair of orphaned street kids—the tough, canny Kuro (Black) and the childish but mysteriously intuitive Shiro (White)—as they deal with Yakuza attempting to take over Takara Machi (Treasure Town). Tekkonkinkreet is a pun on “tekkin concrete,” the Japanese term for reinforced concrete; it suggests the opposition of the concrete city against the strength of imagination.

I grew up being away from my parents, and I always wanted to run away from the place, which I suppose may have influenced my work on Tekkonkinkreet. — Taiyo Matsumoto

A groundbreaking American/Japanese collaboration, Tekkonkinkreet won the 2008 Japan Academy Prize for Animation of the Year, the Grand Prix award at the Anima 2008 festival, the prestigious Best Film Award at the 2006 Mainichi Film Awards, and was named the number one film of 2006 in the annual “Best of” roundup by the New York Museum of Modern Art’s Artforum magazine.

Anime Masterpieces contributors were drawn from an ever-widening community of leading scholars and anime industry insiders.

ROLAND KELTS is the author of Japanamerica: How Japanese Pop Culture has Invaded the US, published by Palgrave Macmillan in 2006 in the US and Europe, and in Japanese by Random House Kodansha in 2007. An updated and expanded paperback edition was released by Palgrave Macmillan in 2007. He is also a Lecturer at the University of Tokyo and the University of the Sacred Heart Tokyo, an editor of A Public Spaceliterary journal, and a columnist for The Daily Yomiuri. He divides his time between New York and Tokyo.

JOHN W. DOWER is the Ford International Professor of History at MIT and a co-founder of the Visualizing Cultures project. His 1986 book War Without Mercy: Race and Power in the Pacific War was honored with several prizes, including the National Book Critics Circle Award for Nonfiction. In Japan, it won the Ohira Masayoshi Memorial Prize for distinguished scholarship on Asia and the Pacific. Embracing Defeat: Japan in the Wake of World War II, which dealt with Japan under the control of American occupation authorities from 1945 to 1952, was honored with a number of awards and prizes, including the Pulitzer Prize for Nonfiction and the National Book Award for Nonfiction. The Japanese translation of Embracing Defeat was awarded “Special Prize” in the Asahi newspaper’s 2001 Osaragi Jiro Prize competition for distinguished nonfiction writing, as well as the Osaka Prefectural Government’s 2002 Yamagata Banto Prize for creative work on Japan by a non-Japanese writer.

[In creating the screenplay, Anthony Weintraub and I] used to have good chats about things unrelated to work...such as family and music. I like him a lot. [As I do not know anything about screenwriting,] I left it all in his hands." — Taiyo Matsumoto

ANTHONY WEINTRAUB is a screenwriter/director/producer and partner, with his wife Caroline Baron, in the New York-based independent production company A-Line Pictures. In addition to writing the screenplay for Tekkonkinkreet, Weintraub was the story editor and contributed additional dialogue to The Animatrix. A-Line is currently developing a number of films, including film adaptations of Bel Canto and The Magician's Assistant by bestselling novelist Ann Patchett--both of which will be written for the screen by Weintraub.  The Magician’s Assistant will also be Weintraub's feature film directorial debut. Along with Tekkonkinkreet director Michael Arias, Weintraub wrote the Foreword to the Eisner award-winning English language re-release of the Tekkonkinkreet manga (Viz Publications, 2008). He has participated in numerous panels and events, speaking on such topics as screenwriting, adapting manga to the screen, the history of animation, Japanese anime, and of course Tekkonkinkreet. He lives in New York with Caroline and their two sons, Asher and Emmanuel.

SUSAN J. NAPIER is Professor of Japanese Studies at Tufts University. A specialist in Japanese literature and culture, she is the author of four books including The Fantastic in Japanese Literature: The Subversion of Modernity, Anime from Akira to Howl's Moving Castle, and, most recently, From Impressionism to Anime: Japan as Fantasy and Fan Cult in the Mind of the West, published by Palgrave Macmillan in 2007. Napier lives in Boston.

FREDERIK L. SCHODT has written widely on Japanese history, popular culture, and technology. Among his works are Manga! Manga! The World of Japanese Comics (Kodansha International, 1983) and Dreamland Japan: Writings on Modern Manga(Stone Bridge Press, 1996). His writings on manga, and his translations of them, helped trigger the current popularity of Japanese comics in the English-speaking world, and in 2000 resulted in his being awarded the Special Category of the Asahi Shimbun's prestigious Osamu Tezuka Culture Award. His latest book, The Astro Boy Essays: Osamu Tezuka, Mighty Atom, and the Manga/Anime Revolution was published by Stone Bridge Press in 2007. He currently resides in San Francisco.

CHARLES SOLOMON has written on the subject of anime for the New York Times, TV Guide, Newsweek (Japan), Rolling Stone, the Los Angeles Times, and National Public Radio's Day To Day. His book, Enchanted Drawings: The History of Animation (Knopf, 1989; reprinted, Wings, 1994), was a New York Times Notable Book of the Year and the first film book to be nominated for a National Book Critics Circle Award. He has also done animation programming for the Academy of Motion Pictures Arts and Sciences, the 1984 Olympic Arts Festival, and the Sundance International film festivals. He currently resides in Los Angeles.

BRIAN RUH is the author of Stray Dog of Anime: The Films of Mamoru Oshii. He is on the editorial board of the journal Mechademiaand has contributed chapters to a number of books on anime and Asian cinema. He is currently a Ph.D. candidate in the Department of Communication and Culture at Indiana University. He currently resides in Austin.

CHRISTOPHER MACDONALD is the Editor-in-Chief of the Anime News Network (ANN).  He joined ANN in 2001 when the small website was just a hobby for its maintainers. Since then, ANN has grown into one of the largest, most respected anime websites in the world. ANN continues to bring anime fans and the anime industry together in an open, unbiased environment of understanding. ANN also publishes Anime News Network's Protoculture Addicts, North America's oldest running anime magazine.

JOHN O'DONNELL co-founded Central Park Media Corporation in 1990.  CPM is the groundbreaking distributor of Japanese anime programming in North America. It was the first anime company to achieve mass market distribution of anime, and to popularize the genre among leading retailers such as Blockbuster, Tower Records, and Musicland. CPM was also one of the first US companies to publish English language translations of Japanese manga and Korean manhwa (graphic novels), another field in which it is an acknowledged leader.

IAN CONDRY is associate professor of Japanese cultural studies in Foreign Languages and Literatures at MIT. His first book Hip-Hop Japan: Rap and the Paths of Cultural Globalization was published by Duke University Press in 2006. He is currently working on a book called Anime Revolution: The Making of Japan's Media Success Story.Since 2006, he has been organizing the MIT/Harvard Cool Japan research project. He currently resides in Boston.