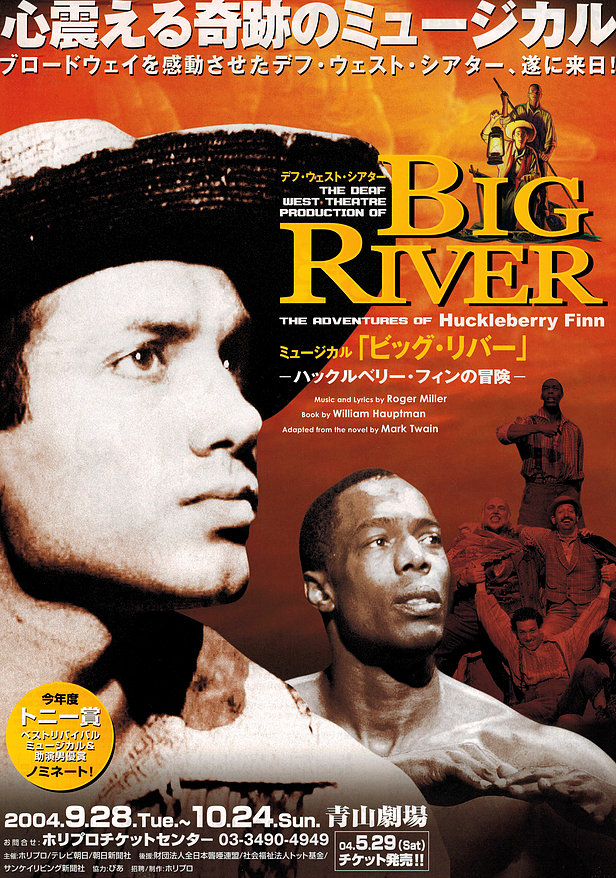 A Tokyo production of the well-known story of Huckleberry Finn. Book by William Hauptman, music and lyrics by Roger Miller.

In 2004, Gorgeous Entertainment was one of the producers for the US National Tour of “Big River.” Later that year, in collaboration with Hori Pro Entertainment, “Big River” came to Japan’s Aoyama Theater in Tokyo.

NORMALLY, nobody would confuse Troy Kotsur with Lyle Kanouse. Mr. Kotsur is tall; Mr. Kanouse is wide. Mr. Kanouse is loud; Mr. Kotsur is silent. But onstage, the two become one in the current revival of ”Big River” on Broadway. An American Sign Language adaptation of the 1985 musical about Huckleberry Finn, the show, with a combined cast of deaf, hard of hearing and hearing actors, opens on Thursday at the American Airlines Theater.

Together, Mr. Kotsur and Mr. Kanouse play Pap, Huck’s drunken, greedy backwoods father. Mr. Kotsur signs the role, while Mr. Kanouse speaks and sings it. But this is no conventional performer-interpreter presentation (even if it were clear who is interpreting for whom). Dressed in identical tatty buckskin, they shuffle spryly side by side, sit comically behind each other, or lie drunkenly on top of each other, mirroring the other’s movements — or playing off them: one takes a swig from a jug, the other wipes his own mouth.

Their Pap is a playful pairing in a show that uses its 7 deaf and 11 hearing actors in intricate and unusual ways. Tyrone Giordano, for example, performs Huckleberry Finn in American Sign Language, while Daniel Jenkins provides Huck’s voice. But Mr. Jenkins is not dressed as Huck; he is dressed as Mark Twain, the author of the 1885 book, ”Adventures of Huckleberry Finn,” on which the show is based. When he is Mark Twain, the narrator, he speaks and signs his part simultaneously. When he is speaking and singing for Huck, he usually sits unobtrusively on the side of the stage while Mr. Giordano takes the center.

The way Mr. Jenkins sees it, he said after a preview performance two Sundays ago, ”I’m not playing Huck; I’m doing the voice of Ty.” Mr. Jenkins did play Huck once, in the original Broadway version. ”I consider the ’85 production to be a luxurious period of research for what I’m doing now,” Mr. Jenkins said.

The last show on Broadway to combine deaf and hearing actors onstage was Mark Medoff’s ”Children of a Lesser God” in 1980. It starred Phyllis Frelich, who is also in the cast of ”Big River.”

”‘Children’ was a play about deafness,” Ms. Frelich said in American Sign Language, through an interpreter, ”but in ‘Big River,’ deafness is not the central focus; the actors just happen to be deaf or hearing.” Since every cast member signs, ”I think most people who are watching lose sight of who’s hearing and who’s not,” Ms. Frelich said. ”Signing becomes like choreography.”

However incidental deafness is to the plot, about Huck’s raft trip down the Mississippi in the mid-1800′s with the runaway slave Jim (played by Michael McElroy), it is probably safe to say there has never been a more central, and more complicated, interweaving of singing and signing on a Broadway stage.

”It has taken three or four times longer to put this show together than any other show I’ve worked on,” said Jeff Calhoun, the director and choreographer of the revival.

To Mr. Giordano, ”This production shows audiences and actors that collaboration across two different languages, two different cultures, can be done,” he said. (Though Mr. Giordano uses only American Sign Language as Huck, he both signed and spoke — he has some hearing, augmented by hearing aids — during a recent interview, and followed up later with an online chat.)

”For deaf audiences, it is new to see such a totally accessible production on Broadway,” Mr. Giordano said. ”They don’t have to wait for a certain date to see a play.” Most Broadway shows have scheduled performances at which a sign interpreter stands to the side of the stage. ”For hearing audiences,” he said, ”this is a completely new form of theatrical expression.”

And it is not just the actors. ”The crew is picking up sign language, too,” signed Ed Waterstreet, the artistic director of Deaf West Theater in North Hollywood, Calif., where the revival originated. ”We can’t afford an interpreter for every costumer.”

Mr. Kanouse and Mr. Kotsur were cast together two years ago at Deaf West. Strong reviews encouraged a move to the larger Mark Taper Forum in Los Angeles, and then to New York, where the musical is being presented by the Roundabout Theater Company and Deaf West in association with the Taper. Mr. Kanouse had performed the role of Pap in half a dozen productions over the last 15 years; Mr. Kotsur had never seen the show nor heard the music.

On the other hand, Mr. Kotsur had been a respected actor in deaf theater for some 14 years, performing in dramas ranging from ”A Streetcar Named Desire” to ”Romeo and Juliet” in American Sign Language, while Mr. Kanouse did not know a single sign.

The first step for Mr. Kanouse, then, was to begin studying sign language with Deanne Bray, a member of a team translating the ”Big River” script by William Hauptman from English to American Sign Language. Ms. Bray is also Mr. Kotsur’s wife, as well as the star of a television series on the PAX cable station called ”Sue Thomas: FBEye,” about a deaf F.B.I. agent. (Mr. Kotsur has a recurring role in the series as a reformed car thief.)

Since sign language uses not only the hands and arms, but also facial expressions and movement throughout the body, Mr. Kanouse had to tone down the physical gesturing he had used in his previous performances and focus more on animating his voice ”in order to match what his partner was doing,” said Bill O’Brien, the producing director of Deaf West Theater.

For his part, Mr. Kotsur had to learn how to sing in sign. ”It was really a struggle for me to find the rhythm inside of me,” he signed. ”That took a lot. How can I understand musical tempo? I can see musicians’ hands moving.” He mimed a cellist bowing a cello; at the American Airlines Theater, the orchestra is seated above the stage with some of its members visible to the performers below. ”I can see what actors look like when they are singing,” Mr. Kotsur signed. ”I can see how their bodies are moving. To me, that’s what music looks like.”

As an example, he explained how he had to interpret the title lyric to the song ”When the Sun Goes Down in the South.” To make the sign for the sun setting, Mr. Kotsur begins with his left arm crossed in front of him parallel to the ground, his right arm in an upraised position bent at the elbow (as if about to take an oath). His right hand is curved into the shape of the letter C, which represents the sun. Normally, he would simply bring his right arm down between his left arm and his body — mimicking the sun falling behind the horizon. To make this a ”sung” lyric, Mr. Kotsur said, he has to bring his right hand down in three stages, matching the rhythm of the music. (As he brings his arm down, he also changes the ”C” to an ”S” — thumb in front of fist — to indicate ”South.”)

Mr. Kanouse and Mr. Kotsur have also developed an elaborate set of cues — bumping, nudging, poking or pointing — so that the deaf performer knows when it is his turn to sign a line or a lyric, or move to the music. ”If I get an itch, I have to be very careful,” Mr. Kanouse said. ”I’ve moved my leg when I shouldn’t have, and he’s taken it as a cue.”

The system is so involved, Mr. Calhoun said, that it can easily go awry. ”We have 18 actors’ bodies,” he explained. ”We have lighting cues and we have scene changes, and we use all of those as cues for the deaf actors. We have some kind of visual cue usually every four counts.”

After two years of performing together, Mr. Kanouse and Mr. Kotsur have grown comfortable with the part and each other.