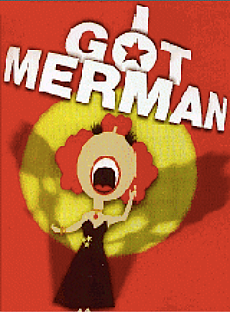 Premiered in 1987 in Tokyo. The show was the debut of Amon Miyamoto, who directed, choreographed, and wrote the musical’s book. In 2003, the musical was performed at the Majestic Theatre in Dallas, Texas with a new book by Michael Wolk.

“I Got Merman” first premiered in Tokyo, Japan at the Buddhist Hall in 1987. This was Amon Miyamoto’s debut piece, who directed, choreographed, and wrote the book. It has continued for 25 years, and for the first time in 10 years, it has a special production where it featured 3 different casts this past January. In 2001, this musical was brought to Stamford, Connecticut at the Stamford Center for Arts, which was directed by Miyamoto as well. In 2003 it was then performed in Dallas, Texas at the Majestic Theatre, with a new book by Michael Wolk.

Described as a “musical revue in two acts,” We meet three different actresses that all emulate the “Broadway Queen” Ethel Merman, in what happens to be a rehearsal for a show that is about her. Showcasing classic Broadway tunes, perhaps made popular thanks to Merman, these three women delve into the life of this famed star.