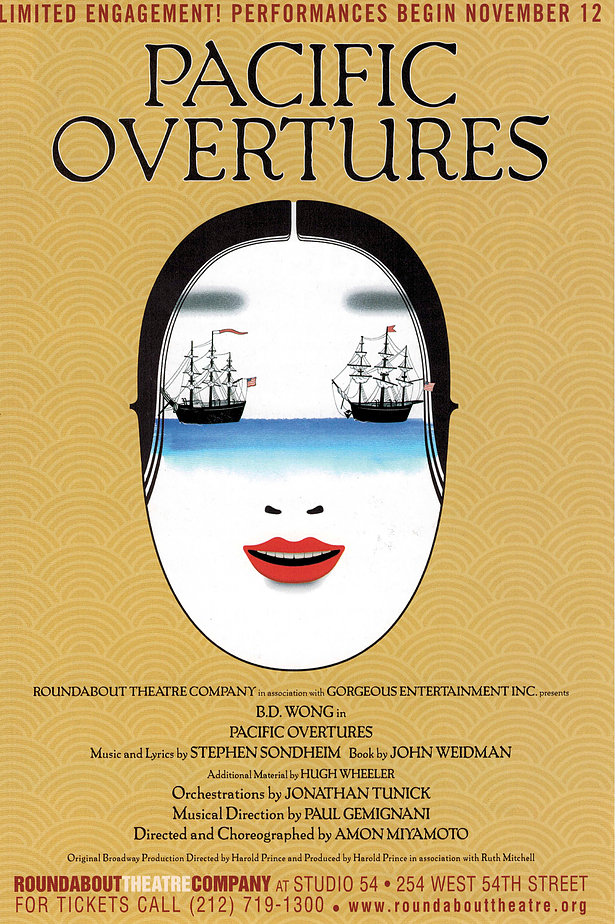 Directed by Amon Miyamoto. A 2000 revival of the 1976 classic directed by Harold Prince.

Original creators Stephen Sondheim (music and lyrics) and John Weidman (book) attended a performance of “Pacific Overtures” at the New National Theatre Tokyo, and what they saw stunned and delighted them. Director Amon Miyamoto had boldly re-envisioned their musical from the Japanese point of view, giving it an energy and eloquence unmatched by any prior production. Sondheim and Weidman’s praise for Miyamoto’s staging helped secure invitations for the Japanese-language production to be part of the Lincoln Center Festival and the “Sondheim Celebration” at The Kennedy Center in 2002. Critics in both New York and Washington, D.C. raved about the musical. In the fall of 2004, the Roundabout Theatre in association with Gorgeous Entertainment presented the first English-language version of Amon Miyamoto’s dazzling production on Broadway.

“One of the most entrancingly beautiful shows ever to come to Broadway!”
**Terry Teachout, The Wall Street Journal**

PRAISE FOR THE JAPANESE-LANGUAGE PRODUCTION
“Directed with bountiful verve and imagination by Amon Miyamoto… Mr. Miyamato and company have bestowed a great gift upon New York: a chance to see muscle-flexing Americans as aliens at a moment when it is especially crucial for the United States to understand how it is perceived internationally.” **The New York Times**

“The New National Theatre, Tokyo’s, enthralling “Pacific Overtures” is the most moving and accessible production you’re likely to encounter of Stephen Sondheim’s worldly musical… Who knew our most sophisticated theater composer would find such seminal treatment in such unlikely hands?”
**The Washington Post**