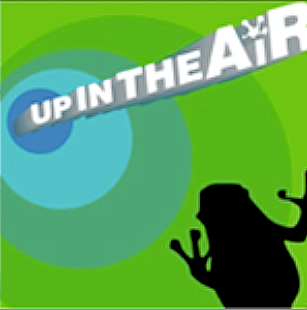 UP IN THE AIR

Based on a beloved novel by venerated Japanese author Mizukami Tsutomu. A wickedly funny fable about a frog who leaves his local pond to climb the tall tree that shades the pond.

Conceived and directed by **Amon Miyamoto**, composed by Tony-winner **Henry Krieger (DREAMGIRLS)**, with book and lyrics by Tony-winner **Bill Russell (SIDESHOW)**, UP IN THE AIR premiered at the Kennedy Center for the Performing Arts in February 2008.

Based on one of the most beloved novels of the venerated Japanese author, Mizukami Tsutomu, UP IN THE AIR is a wickedly funny fable about a frog who, believing his friends and family are “stuck in the mud,” leaves his local pond to climb the tall tree that shades the pond.

Boonah feels he has found “heaven on earth” on the treetop — until he realizes it is the aerie of a hawk. In the life-and-death adventures that follow, Boonah encounters a variety of similarly unlucky creatures and witnesses the gamut of behavior from cowardice to valor, from selfishness to grace — and he returns to his pond with a new, heartfelt understanding of what a gift it is to be alive.

PRAISE FOR UP IN THE AIR

“A soaring musical… Up in the Air gets top-flight treatment… Blows the sugary dust off kid’s musicals.”
**-Washington Post**

“Up in the Air mesmerized the crowd with its witty dialogue and showstopping tunes.”
**-Washington Time**